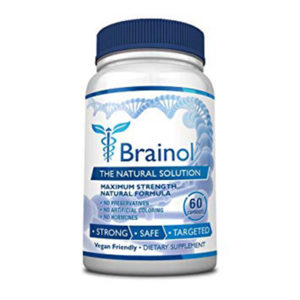 Brainol is one of the relatively newer nootropic supplements on the market. It is formulated with many herbal extracts and multivitamins. It claims to be fast-acting and effective. Brainol differentiates itself from its competitors with a “dual action formula” that’s supposed to both energize and fuel the brain. It claims to help with memory and focus, as well as boost energy. The company claims that this is a very unique blend of ingredients, but looking at the list, this isn’t true.

Ginkgo Biloba helps with memory and increases blood flow to the brain. Bacopa Monnieri boosts cognitive abilities and memory. Guarana is a stimulant that helps decrease fatigue, increase concentration, and boost your mood. Carnitine, L-Tyrosine, and L-Theanine help lessen stress and boost brain function. DMAE and Huperzine A are both said to help prevent Alzhimer’s Disease. There are some concerns about the amount of each ingredient present, as well as the side effects. The core ingredients of Ginkgo Biloba, Guarana, and Huperzine A are all present in only small amounts, so their effectiveness in this supplement is questionable.

Participants took Brainol for a one month period. Most people experienced better concentration and a boost in energy almost immediately when taking this supplement. However, the effects were better in the first week of trial compared to in the last week. This isn’t unexpected since the body can build a tolerance to the supplement. It’s not advised to increase your dosage though, because that could lead to more negative effects.

Two of the ingredients, Guarana and Huperzine A, come with lots of side effects: Guarana may cause insomnia, headaches, and irritability. Huperzine A has been connected with mild gastro-intestinal issues and headaches. Guarana is also used mostly for its caffeine properties, which can come with some anxiety, shaking, and other effects of caffeine.

The general impression of Brainol is that it’s just okay. While it has a lot of ingredients that have good brain benefits, these ingredients are present in only small amounts. The positive effects that were felt are likely due to the caffeine of the Guarana, rather than anything of the other nootropic ingredients. Brainol also claims to be fast-acting, which is true, but the effects weren’t very long-lasting, and begin to die down after some time. You won’t really experience better memory, better focus, or more energy in the long term.