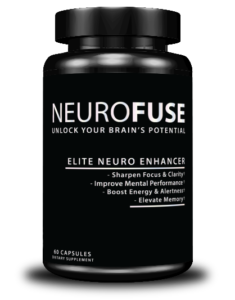 Neurofuse is a nootropic brain supplement that claims to improve mental performance, focus, clarity, alertness, and energy in four weeks. It also claims to reduce stress and anxiety in as little as three days. Neurofuse costs $69.99 for one bottle, which contains enough capsules for one month.

Bacopa Monnieri may help to enhance memory, attention, and cognition. Rhodiola Rosea and L-Theanine may help reduce stress and anxiety. Caffeine acts as a stimulant, giving a boost of energy and alertness. Phosphatidylcholine may help to prevent memory loss or age-related mental decline. Choline Bitartrate and DMAE are both important ingredients as they both play a role in the production of acetylcholine in the brain, which is one of the most important neurotransmitters. Huperzine A may also help increase acetylcholine levels and boost mental ability. Vinpocetine may be a cognitive enhancer as it is known to increase blood flow to the brain. Alpha Lipoic Acid may help reduce migraines and headaches. Vitamins B6 and D3 are both necessary for optimum brain health.

Most of the ingredients in Neurofuse have some studies to back up their brain-boosting claims, except for Alpha Lipoic Acid. Also, the company has not released the exact amount of the ingredients used, so it’s impossible to tell if there’s enough of each ingredient to be effective.

Participants tried out Neurofuse for the recommended four weeks. At the beginning of this trial period, there were some participants who felt like their anxiety and stress had been reduced. Others reported some temporary feelings of alertness and focus. By the end of the trial period though, none of the participants felt like there was a long-lasting effect on their mental performance. Most participants didn’t report experiencing any effects at all.

While none of the participants experienced any side effects, there are some that come with the ingredients in Neurofuse: headaches, insomnia, fatigue, heart palpitations, upset stomach, diarrhea, anxiety, irritation, and skin rashes.