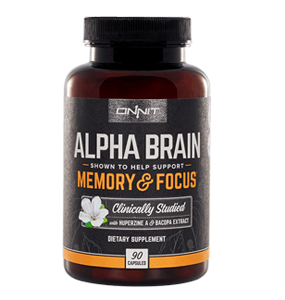 Onnit Alpha Brain Nootropic Brain Booster was launched in 2010 and is promoted to be clinically studied for boosting memory, focus, as well as clarity. It makes such as bold claim of being one of the only nootropics to go through “the rigors of clinical testing.”

Its premise is simple: the nootropic may help you recall names and places, focus on complex tasks, and enhance your mental speed in response to stimuli. This makes Alpha Brain a good companion for your work project, a social gathering, or an athletic performance, according to its manufacturer.

This nootropic promises to help support certain brain functions, such as memory, mental speed, and focus. Its makers claim that according to two double blind clinical trials conducted by the Boston Center for Memory, Alpha Brain demonstrated improvements versus placebo when it came to memory, brainwave patterns, and focus. It is said to support verbal memory, peak alpha brain waves or flow state (thus the name?), and processing speed after just a single dose.

There’s something to be appreciated in the fact that Alpha Brain is caffeine-free and doesn’t pose the risk of dependency or adverse side effects typically linked to pharmaceuticals.

Anecdotal reports, however, are a different story, as some of them show jaw pain, headaches, and related symptoms with Alpha Brain use. These are likely related to the high amounts of acetylcholine in the brain. In addition, some users experience vivid dreaming – a given benefit of the supplement – but at rather uncomfortable levels.

Since there’s quite a volume of Alpha Brain reviews out there, it’s easy to pick reviews at random and have a deeper reading of each of them. One, for instance, took the product with a light meal in the morning, and within an hour his eye began to twitch and he nursed a terrible headache and nausea. The horrible reactions were there in some 3 out of 5 reviews (in different batches) that we collected, and that isn’t  something to be ignored in a product of such astounding reach and popularity.

A 60-ct bottle of Alpha Brain is sold at around $60, with savings for bulk buys and subscription. One of its selling points is the variety of packages to choose from, whether it’s a 30-ct, 60-ct, or 90-ct supply to purchase.

Alpha Brain enjoys thousands of customer reviews on the Web, and this prevalence of use and available can work much to its advantage. Looking closer, though, you’d see on Amazon that 24% of the ratings are 1-star, a strong show of disappointment for a supposedly top-tier nootropic. This is likely not just about the product being blah or ordinary; upon closer inspection you’d see that the low raters suffered feeling sick, headaches, and a range of different negative reactions.

It’s refreshing to have a nootropic like Alpha Brain that doesn’t put the entire industry to shame. By this we mean it’s relatively safe for intake and the makers are pretty transparent and upfront about their blend and its ingredients.

Now, onto the downside, we aren’t as confident taking Alpha Brain as we do with other newcomers in the market, for the simple reason that the documented side effects are numerous. We can “ignore” a few reactions, but with so much variation in every person’s brain chemistry and reaction to supplements, it should be quite alarming to get so many complaints of side effects from different people.

Alpha Brain is renowned, trusted in many nootropic-loving circles, but simply doesn’t hit the spot as far as safety and convenience in use are concerned.