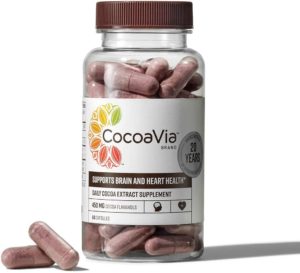 CocoVia cocoa flavanol capsules offer a different approach to nootropic supplementation: adding their “highly concentrated” capsules to your daily routine to support heart and brain health. The concept is new as it is intriguing. The capsules are vegan and promoted to be the most convenient way to get your daily serving of cocoa flavanols, openly a powerhouse source of antioxidants that fight aging and help optimize brain functioning. Let’s learn more about this brain enhancement player and see its merits.

From the name itself, CocoVia capitalizes on the popular benefits of cocoa flavanols for optimal brain and heart health. Its main (and only) showcase is the cocoa extract derived from beans. Studies show that flavanols in cocoa support neuron production, brain function, blood flow, and well as blood supply to brain tissue. This, in the bigger scheme of things, is expected to have a positive role in preventing age-related brain degeneration, such as the dreaded Alzheimer’s disease.

Cocoa flavanols are proven powerful as plant-based nutrients derived from natural cocoa beans – nature’s way of boosting brain power. The cocoa flavanols in this brain enhancer, according to its marketing materials, support brain health and cognitive function through promoting healthy blood flow. And why is healthy blood flow ever so important? Because it allows the brain to get the continuous supply of oxygen and nutrients needed for it to perform at its best. According to this capsule, it has 20 years of research backing its claims, including numerous cognition studies.

Generally, consuming large amounts of cocoa can lead to caffeine-related side effects, including but not limited to nervousness, increased urination, sleeplessness, and fast heartbeat. Cocoa can also cause allergic skin reactions, constipation, as well as trigger migraine headaches.

In a study, Harvard Health also warned against eating the recommended two portions of CocoaVia every day to get the amounts necessary to gain the benefits. This means the daily dose comes with an extra 200 calories and 36% of the daily recommended limit for saturated fat – translating to a 20-pound weight gain over the course of a year if you don’t walk it off or exercise!

Amazon is a somewhat reliable gauge of users’ trust and confidence in brain boosting products such as CocoaVia. This cocoa-based product has 135 reviews as of this writing, 56% of which gave 5-star rating while the rest is almost evenly distributed among the others. Interestingly, much of the positive reviews point to other benefits, such as optimizing their cholesterol levels. There isn’t a lot that we found delving on brain boost and wellness, and the same applies to other review sections on the world wide web.

CocoaVia has a very strong benefit claim in the form of cocoa flavanols, which undoubtedly offer whole body benefits with such great flexibility. But is it the best option for brain enhancement? Hardly, if we are to consider the top performers on this review list that offer formidable brain-boosting ingredients and tried-and-tested results. Cocoa, too, isn’t for everybody, especially with individual reactions to it and the different quality levels in growing the bean. If you don’t sit well with cocoa (or the high recommended daily intake), then it has readily failed for