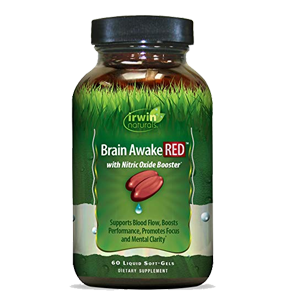 From Irwin Naturals comes the brain performance booster Brain Awake, which promotes focus and mental clarity as well as maximizes thinking power. The selling point? It’s said to be scientifically formulated for boosting brain function and mental performance for cognitive tasks in life every day.

Brain Awake puts common nootropic ingredients together for a brain-boosting blend. Interestingly, apart from common nutrients and herbs, it also incorporates MCT oil for sustained energy production. Let’s have a look below for the individual benefits of the ingredients.

Brain Awake has unparalleled fixation on the words “thinking power,” as shown in its product promotions. Its objective is to deliver key ingredients in the formula to do the following:

It hits on other products that only provide an short-term boost at the steep price of long-term jitters and fatigue. Unlike them, according to its marketing spiel, Brain Awake delivers potent brain boosters and supportive nutrients for calming and nourishing the central nervous system. The target users are students and working professionals alike, and practically anyone who seeks optimal performance and productivity in their everyday lives.

People who aren’t regular caffeine consumers should be made aware of the presence of caffeine in this formula, since Brain Awake has a special focus on energy boost and production in its users. This Irwin Naturals product also carriers the State of California Prop 65 warning, stating that it contains a chemical known to the state to cause birth defects or other reproductive harm.

A bottle of Brain Awake costs around $22.98 in online sellers, and this is undeniably among the most affordable in nootropics available today. Its customer reviews are mostly generic, saying they are willing to give it another try. This is probably code for “It’s blah but I’ll keep trying,” which we’re not supposed to do when it comes to supplements. Brain enhancers work or they don’t, and too many chances given can be risky for your well-being and your chance of finding a product with truly breathtaking outcomes.

Brain Awake is laudable for its special focus and attention to keeping people awake and stimulated throughout the day to complete their tasks. But at what cost? For us, it’s a pretty dear price to pay: some questionable ingredients, lack of stellar reviews and feedback, and a price point that tells us there’s nothing outstanding about the formula.

Our four-week product trial, too, was abruptly halted around days 7 and 8 due to the presence of nausea, which only intensified with continued use. Will we use it again? Hardly likely. But we’re holding out hope that Brain Awake won’t always be one of those generic-looking and acting supplements, and that it can actually lead to brilliant results without the nasty effects.