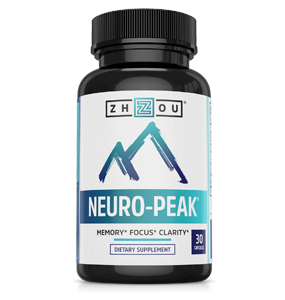 Neuro-Peak is a product of Zhou Nutrition, which offers a range of supplements tailored for both men’s and women’s health. It’s claimed to be a scientifically formulated nootropic supplement, where great care went into combining the right amount of every ingredient into a premium formula for supporting memory, focus, and clarity.

Given its classification as a nootropic, Neuro-Peak is expected to help support memory and cognition. How it accomplishes this is simple: through the unique combination of ingredients crafted to help support oxygen and circulation in the brain, brain cells, as well as neurons.

The supplement is suggested to be taken as 1 capsule 1-2 times a day, preferably with meals.

This nootropic complex, true to its name, offers cognitive benefits. Its blend is said to be carefully curated and combines ancient herbs as well as naturally occurring compounds to help support as well as enhance performance over time.

The primary ingredients of Neuro-Peak are grouped into two:

Neuro-Peak is marketed as a “memory, focus and clarity formula.” It is positioned as a supplement that targets the following benefits:

Its product promotions are largely mum about any side effects that could set in, which only means two things: (1) users should expect a great time without adverse side effects, or (2) there are unspoken risks that come with product intake. At any rate, the manufacturer warns against exceeding recommended dosage and suggests consulting a physician prior to intake if one is pregnant or nursing, or a child.

Neuro-Peak is available at $21.04 per bottle (one-time purchase) or lower with auto-deliveries or subscription over at sites like Amazon. The good news is there are thousands of customer reviews on Neuro-Peak available on Amazon alone, where it’s rated highest on qualities such as ease of swallowing, flavor, and ingredient quality. Such extent of review base is hard to ignore, because it means that considerable numbers of people have tried it or continue to take it regularly and are likely seeing results.

It’s easy to appreciate and consider a nootropic like Neuro-Peak because of its sheer simplicity in ingredient list, once-daily dose, and even benefit claims. It’s uncomplicated and unproblematic in what it strives to do. It also enjoys significant numbers of customer reviews, which could signal trustworthiness at current rating levels. The only letdown, however, is that the product literature doesn’t say much of potential side effects or any safety reminders. Safety is a crucial aspect and one that is never to be ignored or forgotten.