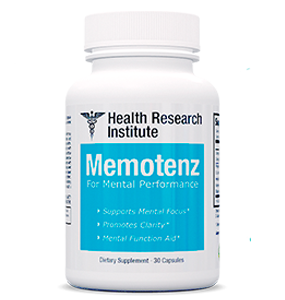 Memotenz is a nootropic supplement that is supposed to enhance brain function, such as memory, focus, and concentration. It is formulated with Ginkgo Biloba and St. John’s Wort as its two main ingredients. Each bottle contains 30 capsules, and costs $79.98, although you can get it discounted if you buy in bulk.

The two main ingredients in this supplement are Ginkgo Biloba and St. John’s Wort. Studies have shown that Ginkgo Biloba can improve your brain function, since it helps your brain absorb glucose and helps the transmission of nerve signals. For St. John’s Wort, some studies have shown it has a calming effect, but this isn’t listed in the effects of Memotenz. It also contains some amino acids and other proteins, which are supposed to protect your brain cells and help them grow. Its non-active ingredients include gelatin, which means you shouldn’t take these if you are vegan/vegetarian.

We tested Memotenz over the course of two months. Some participants noted better concentration, but none noted improved memory. The effects were only apparent after a few weeks of use, so this is probably a supplement you need to be taking for a while before noticing the effects.

Memotenz claims to have no side effects, but some participants experienced unusual sleepiness or headaches. Others noted some dizziness, or insomnia.

Overall impressions of the product is that it may work a little, but it does not deliver on all of its promises. Participants only noticed an improvement in their concentration, but not in their memory. Some participants didn’t experience any changes at all. Memotenz also says that there should be no side effects, but based on our participants, this is not true. Side effects may include sleepiness, dizziness, headaches, or insomnia.