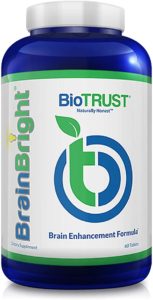 Brain Bright is a brain health supplement that claims to improve memory, improve concentration and focus, and help keep the brain healthy by shielding it from toxins. One bottle of Brain Bright costs $49, and contains enough capsules for one month.

The nootropic ingredients in Brain Bright are all supported by clinical studies. B Vitamins have been shown to slow cognitive decline in older subjects. Gingko Biloba increases memory function and boosts blood flow to the brain. Rhodiola rosea has shown some effect in improving memory and reducing mental fatigue, and may also help reduce anxiety. N-acetyl-L-tyrosine is converted to the amino acid tyrosine in the body, which may improve memory and mental function, as does Acetyl-L-carnitine. Lastly, L-theanine has shown some evidence of increasing alpha brain wave activity, which increases attention.

It’s important to note, though, that although the ingredients in Brain Bright have shown some evidence of being helpful to brain health, most of those tests involved higher doses than are present in Brain Bright. Brain Bright contains lower dosages, so the effectiveness may not be as promised, or as shown in clinical studies.

None of the ingredients in Brain Bright have any known side effects. When we were testing this supplement, participants didn’t report any side effects either. So on this front, it’s a good option for a brain supplement.

Overall, Brain Bright is just an okay brain supplement. No one really reported any improvements in focus, but a few people reported better memory. An unseen benefit was that some people reported reduced anxiety, although this isn’t included in Brain Bright’s claims. If you’re looking for something to help you focus and boost cognition, this probably isn’t the brain supplement for you.